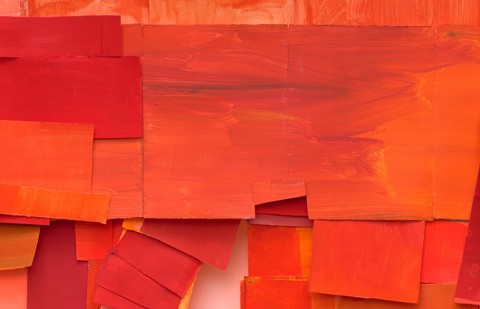 MY ORANGE: A Meditation on Color by Michele Foyer Child of Paprika and Chocolate If we lived during the time of the Dutch East India Company, I would tell you that the color that so captured me was the child of paprika and chocolate. The world no longer swoons over spice, willing to risk a sail beyond the end of the known. And yes, sadly rape or pillage in desperate greed. I had only to pass the window of the Muji store in Manhattan’s Chelsea to discover this color in an umbrella.

What is it that grabbed me? Is it a vibration for which the color is only a foil? Or is it how the color lodges between memory and desire? This redder orange infused with luxurious chocolate yields a strangely jazzier yet muter tone than orange. But if we map out its terrain, inevitably the orange relation comes up.

My Muji Orange is a distant relative of the neon orange of warning, as well as a tangerine streamlined baby of sixties psychedelic abandon. Its crazy older paternal cousin might be the Tang of astronauts or maybe the impossible orange of orange Crush soda, or possibly even Blake’s Tyger burning bright, but its doting grandmother, is definitely -- yes, most definitely -- a bittersweet French marmalade.

There is some mystery to orange.Orange is the only color in the seven-color spectrum besides violet that originates as a noun, naming a particular thing.It refers to the fruit of the orange tree, quite concrete and specific.

What’s in A Word? The Oxford English Dictionary (OED)holds a history of the English language within the etymologies it details.With the word orange we are able to trace history, migration and values of the western world to roots in the East.

The Oxford English Dictionary (OED) notes that in Medieval Latin “the forms arangia, arantia ... aurantia have “popular association with aurum gold from the colour.” Perhaps, the OED postulates, there is an etymological relationship between the Old French orenge for arauge linking or and gold. The OED traces the “loss of the initial n' in French, English and Italian” and "its absorption into the indefinite article” resulting in narange absorbing une (French) and narancia absorbing una (Italian.

Also from the OED we understand that the “native country of orange appears to have been the northern frontier of India, where wild oranges are still found and the name may have originated there.” In Late Sankrit, the word for orange is naranga.; in Hindi it is narangi.

Today we easily think oranges are synonymous with the warm climates of Florida and California and believe they are indigenous to North America. However, those oranges were planted by conquistador sailors who needed to create supplies of vitamin C to take with them to guard against scurvy on their long sea journeys.

Is orange related to the color of the fruit and/or to gold and the word ore (OED, p. 2001)? Are both these not only things, but also experiences of light? More questions arise as we consider other correspondences that I call rhymes and ricochets. Rhymes of Fire + Orange: Outside European Language + History What is orange in cultures outside of the European? In other cultures closed off to our own for so long by the migration and exchange of trade, say the Japanese or Chinese, what is the etymology of the word orange? In Cantonese Chinese (but not in Mandarin), the word for orange is related by sound to the word for gold. At New Year’s the Mandarin orange embodies good wishes for prosperity. Are gold and orange a conflation of all these color experiences of light?

What about other earlier societies? I wonder whether orange might “rhyme” with fire. Fire had the life-giving power that made a large difference to a culture. If gold wasn’t the commodity of value, it might make sense for the word for this experience to be fire. Might gold be in part only an imitation of the light of fire?

These richoceting ruminations about gold and fire are vital, because it is precisely the light of gold or fire that starts to go missing in “my” Muji Orange. It is that chocolate brown in addition to the red of the orange that makes the color step back toward the shade. Muji Orange recedes from the saturation and almost clear brilliance of an ordinary orange that lags just behind the brilliance of yellow—whether the origin is the light of sun, gold or fire.

Muji is a Japanese company and that perhaps contributes and infuses a measure of its aesthetic into that of the west. The store’s name is related to mujo which evokes transience in Japanese. I once heard about Japanese killed colors. These colors had a little bit of death in them, fading from their original brilliance and glory. I couldn’t find reference to them again but only to the rikuyu colors made from graying. In Muji Orange the quality of orange steps away from the brilliance of the sunny orange into the shade, holding a note of something that is darker. It is not a sinister dark to be avoided but one to be savored like a fine chocolate.

Kumquat Color Do I find my Muji Orange -- so beautiful because it captures the life of light and its brilliance -- and the life of dark and its recession? My Muji Orange is a kumquat color par excellence. First, like the sweet rind of the kumquat there is a “taste” of brilliance and then immediately, almost simultaneously, just as the fruit yields a sour taste, my Muji Orange bursts with another very different moody, darker earthy “taste.” Does Muji Orange with its paprika jazzy zest want to dance the tarantula? Is it death or lack of light that gives my Muji color its kick?

Was it the umbrella’s color vibration that pulled me into the Chelsea store? Was the umbrella just an extraneous element or did it figure into it? I wonder if the precise color of orange might also be a "rhyme” with the function of umbrella? Are the form and the vibration related in the poetry of memory?

Tomorrow it Will Rain: Color + Memory Recently I recalled an earlier encounter with umbrellas. When I studied in Madrid in my 20s, I would often take the subway to go downtown to the Turner bookshop. I’d climb the stairs of the appropriately named Sol subway stop that spilled out onto Jose Antonio, emerging more often than not into a scorching sun.

On my way to the bookshop I would pass outside the window of a store that made confections of violets sold in white and purple miniature hatboxes. But my favoritewas the neighboring shop entirely devoted to umbrellas with a placard handwritten in a swirly old-fashioned cursive script in the window that read Manana llovera. Both its whimsy and its sly craftiness were not lost in the English translation -- tomorrow it will rain.

Last December, many years after my sunny Spanish sojourn, when to me it is now irrefutable that night and day, death and life are folded into one another and that Persephone must braid both dark and light -- the Muji Orange color caught my eye. Manana llovera. Tomorrow it will rain.